The idea seems to be growing

The idea of a few room boxes seems to have grown.  The original idea was to (re)make half a dozen of the rooms from Dalton House.  This immediately changed into five of the Dalton rooms and a brand new large Elf kitchen project as I couldn't rejig the Dalton one into the room box space.

I wanted to do it after giving up on making miniatures so that I could save (and display) some of my favourite things.  How I wish I had known this would be the plan when I first began this game as I have sold and given away some lovely pieces over the years that cannot be replaced.  Take note newbies out there - hang on to every little thing because you never know when you might want it again.

I have decided the planned music room needs enlarging - it needs to be wider - so it will now occupy a shelf to itself.  This demanded a rejig of the boxes on the shelves and this led to a box vacancy.  I felt the bedroom might be the modern room to fit in that space as it is probably the least contrast to the  Georgian style rooms around it.  Whilst deciding all this it seemed a shame that the simple bedroom was getting a reprieve whereas the more interesting Rec room and the Hive (my workroom) would be effectively 'binned'.  They are now in play.  Six rooms will now become nine. 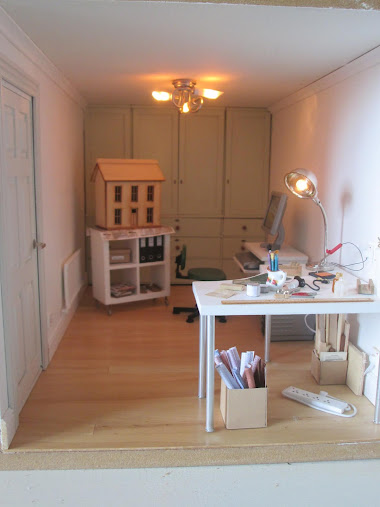 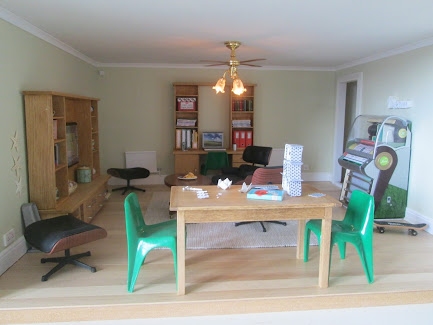 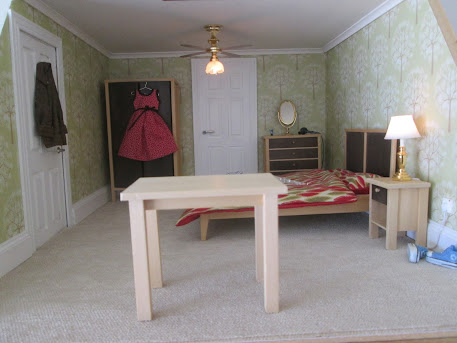 Most of these will need to be set out in a different way as the dimensions of the Dalton House rooms and the measurement of my boxes are not the same.  I am suffering particularly from lack of depth.  If you go down this route any time be very determined as to what size you want your boxes to be and buy the cupboard accordingly.  I could have had a deeper 40cms Billy which would have been spot on but the whole point of my getting rid of the house was to give me more space in my office (now also my workroom) so the 30cms compromise was the right decision for me.

This had led to a bit of a struggle.  The rooms, as they were originally, have become fixed in my mind and  seem immutable.

So, more challenges ahead and a longer project than I thought.

There may be a bit of a pause here for a couple of weeks or so.  My daughter and family will be staying with us prior to moving into their new home a few houses away so I am not likely to be playing minis for a while.  👏

Blogger has removed the notify by email option. If you would like to be notified by email when I write a post just email me and I will add you to the list. Mormson@gmail.com

Where to find all my blogs