This should really have a subtitle of  The pedants guide to 'stuff'.

Painting needed for the library was just the ceiling.  I tape the front edges of the boxes when doing this and press down really well so the edges finish paint free when the tape is pulled off. 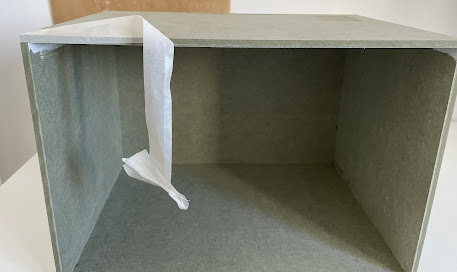 Here is my third order of the same three pieces of (pricey with postage charges) Les Chinoiseries wall paper.  First lot went in Dalton House, the second lot went in the cardboard fiasco but I was grimly determined to have this paper for the library.  I even have matching fabric and red silk for the drapes.  They never got made for Dalton and (obviously) can't be used in the room box.  So to just get three papered walls mostly covered by book shelves is an expensive fixation. Enjoy every little inch you can see here. 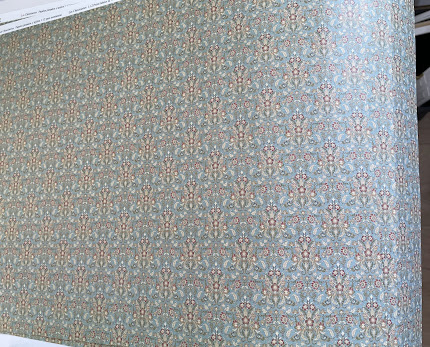 I like to cut wallpaper from the bottom up.  The thinking behind this is that if I trimmed the top edge to remove the name strip and then measured for the strip of paper I would end up with two edges cut by me both of which may not be all that wonderful.  In the main that wouldn't matter if was a bit wonky because generally the edges will be covered by coving and skirting.  By using the bottom edge as an already cut edge I have just saved myself one lot of cutting (times three on all three papers) and I have an absolute guarantee that the pattern will all run perfectly in line around the room.
I make a thin card template of the height of the room, lay that on the paper in three or four places marking the top, remove and join up the marks using a yardstick. 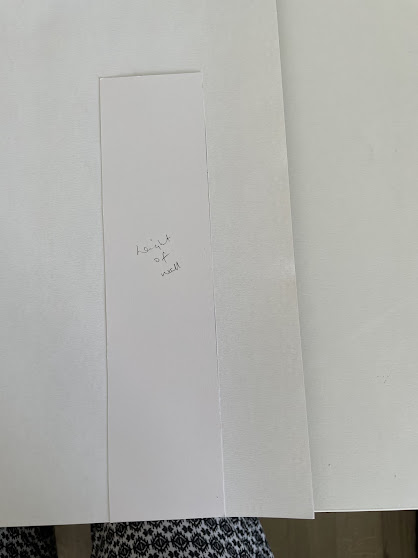 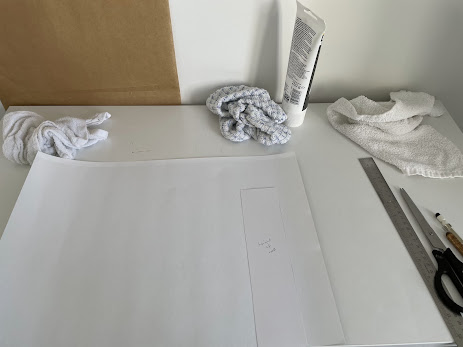 Et voila one painted and papered library.
The Dalton House library had one of my trompe l'oeuil effects behind a partly open door but there is no way I have room to replicate that here but I still wanted that central door.  Little did I know what a kerfuffle that would be.  I contacted and ordered (in turn) from three of my trusty suppliers for the usual flat back false door that I used in Dalton house attic apartments back walls.  First one came with a stupid back frame which needs the hole to be cut to set it in.  Double whammy - no way was I doing that.  Second one the same but this supplier said the factory in China who had made the perfect false doors had changed hands and in the process changed the design on this door.  She has contacted them and there is a promise to change back but clearly that will take an age.  Meanwhile I had a conversation with another vendor who makes his own stuff and was assured his were flat back.  They are but I am too fussy.... they are a rectangular piece of routed MDF so the wood quality is not good and I like a separation between frame and door.  Nothing for it but to do a cobble of my own.  Firstly breaking down a normal opening door kit and removing the pin, paint, add door furniture and stick to the wall. 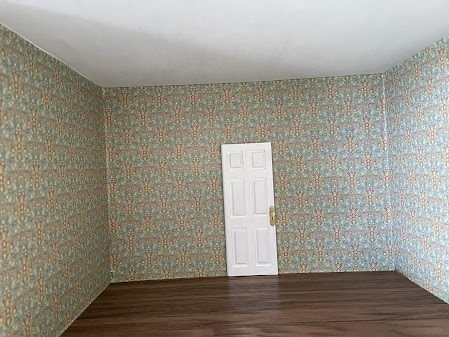 The usual framing is then too thin to go around the door and look right.  Luckily I had two sets for some reason so they were trimmed to size as they were slightly too tall without the threshold piece in place, and then glued back to back to make the required thickness.. 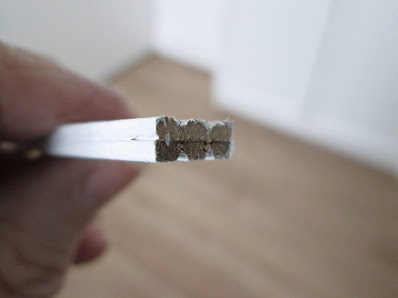 Door frame added and it all looks OK. 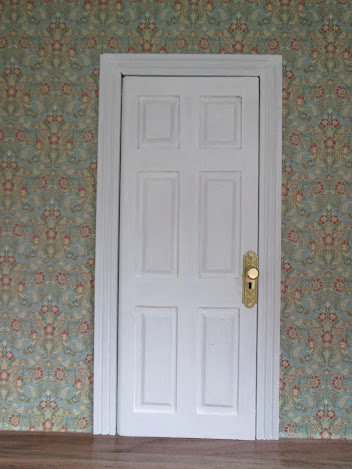 I miss the clever trompe l'oeuil effect and the figure walking through the door but I have to keep impressing on myself this is not what these boxes are about they are simply mementos of work done and hold things I don't want to part with.

The light went in next.  This was a straightforward centre of the room light and there are no lamps to add to this room.

There has been much switching around of various lights from room to room.  This is not unusual in this mini game as I am never quite happy with the range of lights available to us, but this seemed to be the least worse for a library atmosphere.  The Dalton House room was fitted with down-lighters (can lights) in front of the shelves and had a system to control the humidity and temperature of the room to help preserve very old books. 😂 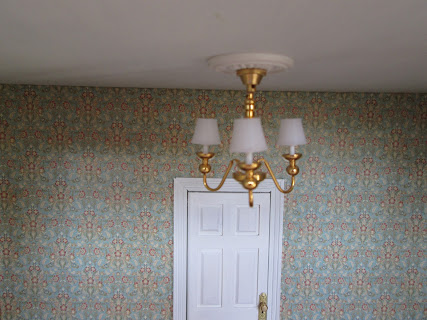 Just a reminder to test each time you do something with a light - is it working OK before you start?  Still OK when wires threaded through and light glued in place?  Still OK after extending the wires if you need to?  It is easy to do  -  just press each wire (after splitting in two and exposing the copper wires)  on to the terminals of a nine volt battery.  Not easy to see here but I am pressing one wire on on terminal with my ring finger (left) and then touching the other terminal with the other wire (right). 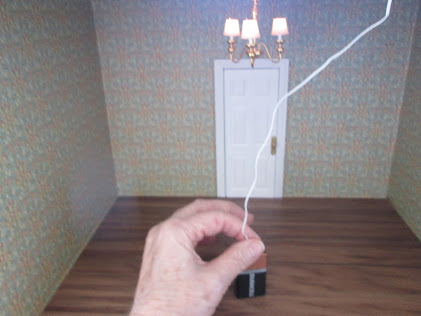 The wallpaper went in well and there is no nasty gap in the join of ceiling to wall, plus this is a modern room so I decided against coving even though it was all painted ready to go.  It brings too much distraction into the room where I want the shelf contents to be the focus.

So it was just a matter of cutting four small bits of skirting, 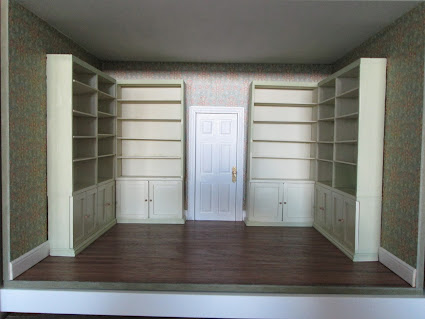 The skirting and shelves are not glued in place yet as I want to dress the shelves first to save me fiddling around inside a room doing it.

Here is a reminder of where this room began having been gouged out of Dalton House. 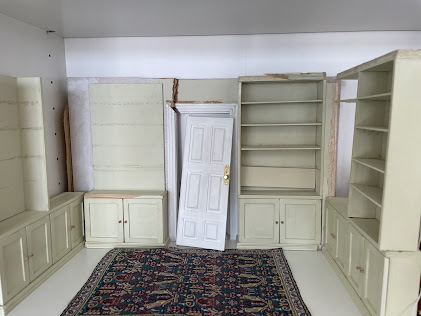 Blogger has removed the notify by email option. If you would like to be notified by email when I write a post just email me and I will add you to the list. Mormson@gmail.com

Where to find all my blogs